National Security Advisor Ajit Doval today said easing of restrictions from all parts of Jammu and Kashmir depends on how Pakistan behaves. The state has been under partial lockdown since the first week of August after the centre scrapped special status from Jammu and Kashmir and divided it into two union territories.

“Pakistan is trying to create a situation of instability so that it can take advantage and people can’t come out, and then it will say people themselves are observing civil curfew,” Mr Doval told NDTV’.

Internet and phone lines remain snapped at parts of Kashmir valley, while communication lines are now open in Jammu region and Ladakh. “Communication is very important but not at the cost of human lives. We cannot start mobile (connections) so that terrorists get freedom to communicate,” he said.

“We would like to see all restrictions go, but it depends on how Pakistan behaves. It’s a stimulant and response situation. If Pakistan starts behaving, terrorists don’t intimidate and infiltrate, if Pakistan stops sending signals through its towers to operatives, then we can lift restrictions,” Mr Doval told reporters today. 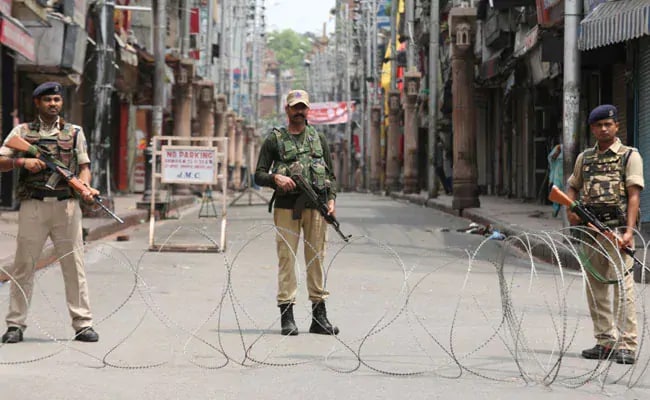 Ajit Doval said out of the 199 police station areas in Jammu and Kashmir, restrictions are in place only at 10 places

“92.5 per cent of the geographical area of Jammu and Kashmir is free of restrictions,” said the National Security Advisor, who had been camping in the state for weeks to coordinate security deployment and monitor intelligence operations.

“There are Pakistani communication towers 20 km along the border, and they are trying to send messages. We heard intercepts that told their men ‘how so many apple trucks are moving, can’t you stop them? Should we send you bangles?’,” said Mr Doval, referring to code words the terrorists use to request logistics and weapons from their handlers.

Four people, including a two-year-old girl, were injured after terrorists attacked the house of a fruit trader in Sopore for defying their warning to keep their shop shut. The police said the terrorists are trying to instill fear among people. Mr Doval has asked the authorities to airlift the injured girl to Delhi’s AIIMS.

Baby Asma of 30 months is among the injured in militant attack on fruits merchants in Sopore. She didn’t deserve this. We’ve put in all efforts to get an air ambulance ASAP to take her Delhi for advanced medical attention. Prayers are requested.

1,878 people are talking about this

He said out of the 199 police station areas in Jammu and Kashmir, restrictions are in place only at 10 places.

“No question arises of Army atrocities as only the state police and some central forces are handling public order. The Army is there to fight terrorists… I am totally convinced that majority of Kashmiris support the abrogation of Article 370. They see greater opportunities, a future, economic progress and employment. Only a few miscreants are opposing it,” said Mr Doval.

The National Security Advisor has travelled across Jammu and Kashmir extensively in the weeks after special status was scrapped, meeting people and analysing the ground situation. In some photos released by the government amid the restrictions, he was seen sharing a meal of traditional Kashmiri food served on the streets by a handful of residents in Shopian, with shuttered shops in the background and a ban on large gatherings in place.