Washington: The burning of an American flag in front of the White House during President Donald Trump’s address on the US Independence Day led to a violent scuffle between anti- and pro-Trump groups, leaving two US Secret Service agents injured.

CNN reported that Leftist protesters burned the flag outside the White House and then clashed with supporters of Trump.

The protests, which turned into violent clashes at times, took place just blocks from crowds who had gathered to watch Trump’s speech and fireworks displays on the National Mall.

Led by activist Joey Johnson, a group from the Revolutionary Communist Party, USA, linked arms and set an American flag on fire outside as they chanted, “America was never great”.

The secret service intervened quickly to extinguish the fire even as the protesters chanted “Burn, baby, burn”. After the flag was extinguished, Johnson’s group clashed with a group of pro-Trump protesters, who began chanting, “Trump 2020”. 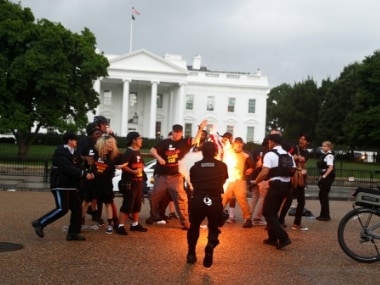 A police officer puts out the fire after demonstrators burned a national flag in front of the White House during Independence Day protest in Washington. Reuters

The two secret service agents received minor injuries in the melee and the two protesters were arrested on Thursday.
Trump became the first US president in over 70 years to deliver an Independence Day address, which the Opposition Democratic leaders criticised for what they alleged politicisation of the country’s declaration of independence from Britain on 4 July, 1776.

Joined by First Lady Melania Trump, Vice President Mike Pence, his cabinet colleagues and top military leadership, Trump in his address to thousands of people said this was an occasion to salute the US soldiers and generals.

In his ‘Salute to America’ address, Trump said the same American spirit that emboldened country’s founders has kept its people strong throughout its history.

He recognised each branch of the armed forces, noting the Space Force would soon be added.

Several separate flyovers of military aircraft took place as Trump spoke about the legacy of the armed forces.

“On this 4 July, we pay special tribute to the military service members who laid down their lives for our nation. We are deeply moved to be in the presence this evening of gold star families whose loved ones made the supreme sacrifice,” Trump added.