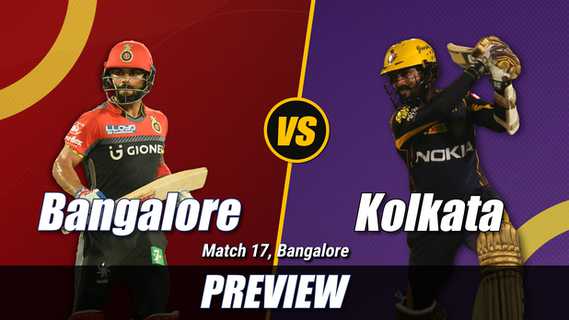 Just four games in and the Royal Challengers Bangalore have already become the butt of all jokes in this edition of the Indian Premier League. And it’s not without reason; they are the only side so far in the competition with no wins to account for.

One loss at home, and three away, have them rooted to the bottom of the table. While they conceded big wins in their away games, the only occasion they had a sniff of crossing the line was their first game at home against Mumbai Indians, where they fell short by just six runs. Batting failures, sloppy catching, lackluster fielding and some poor decision-making have collectively hindered what is a good side on paper.

The team combination and the resultant losses haven’t helped them settle in on a definite XI. A sorted XI is a far cry, with them having had three different opening pairs in four games. The over-reliance on Virat Kohli and AB de Villiers has hurt them with the pair not firing to the potential. The death bowling continues to be a nagging issue with them going just under 10 this season, as compared to over ten in the tournament as a whole.

KKR, on the other hand, could be hurting from the loss that they were dealt with in the Super Over against Delhi Capitals – their first this season in three games. Kagiso Rabada showcased why he is regarded as such a prodigy with his yorker to Andre Russell, who has been KKR’s star consistently so far this season, was celebrated as the “ball of the tournament” even.

Russell is among the top three of the highest run-scorers this season, and has single-handedly kept KKR in the contest when they were found wanting, with bat more than ball, striking at a massive 248.44 and averaging 79.50. While Russell has held his end, KKR are gradually coming into the mould of shaping a team with personnel that can deliver in key moments. The likes of Nitish Rana, Robin Uthappa, Dinesh Karthik and Kuldeep Yadav have stood up in various situations to bail their side out of trouble. Their only worry though, remains the opening partnership of Sunil Narine and Chris Lynn, with the Australian seemingly unable to get going.

While KKR have little to worry about despite having conceded 180-plus in three games, all eyes will be on RCB when they return for a string of home games starting with KKR on Friday (April 5), they could do with some respite from the quandary of combination to start off. They are running out of time. And their fans, patience. If they must turn things around, the start of it will have to be against KKR. However, even the stats gods are stacked against them, with the visitors having won the last three encounters between the two sides at the venue.

What to expect: No respite from the heat in Bangalore with temperatures rising up to 35 degrees. No chance of rain. The covered-up centre wicket had a mild covering of green on the eve of the game, but could be an entirely different story on game day. It will, however, typically be a wicket that has a lot of runs in it.

Kohli had suggested making changes in bulk following their loss to Rajasthan Royals. Nathan Coulter-Nile will only be available from April 13. But Tim Southee’s availability since the start has not inspired Kohli to give him a go, with them opting for the all-round option of Colin de Grandomme or Moeen Ali instead. That, despite RCB conceding just under 10 in the death. Southee, also functional with the bat, could be a handy inclusion to provide the hosts some zip in the bowling. Yuzvendra Chahal has been their lone shining star in the bowling, and has lacked aid at the other end.

If RCB are hell-bent on having two all-rounders, like they do in Ali and Marcus Stionis, they could bring in Southee for Shimron Hetmyer, who has failed to kick on so far. They could also do with giving Washington Sundar a go. He proved his prowess for the Rising Pune Supergiant in the powerplay with some handy scores along the way.

Sunil Narine is “good to go” in Piyush Chawla’s words. He will slot right back in if it’s the case in place of Nikhil Naik. KKR are unlikely to make further changes.

– KKR have beaten RCB in their last three head-to-head encounters at the Chinnaswamy. Only MI (2008-12) had a longer winning run at the venue against the home side.

– RCB have taken only one wicket in the Powerplay in their first four games – the fewest among all sides.

– AB de Villiers averages 24.92 against KKR in 18 matches – the lowest for him against any opponent.

Artificial Intelligence A-Z Learn How To Build An AI