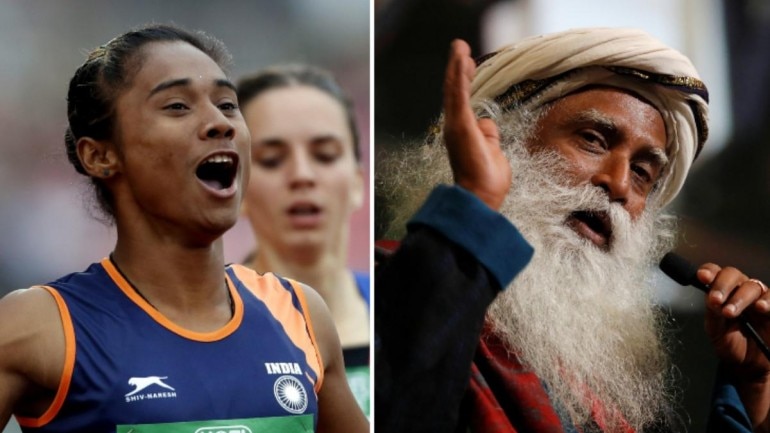 ou don’t expect godmen to boast of a robust vocabulary derived from Urban Dictionary. But when it is Sadhguru, the expectations might be a little more than that from, say, a Gurmeet Ram Rahim. So when Sadhguru made a slip that is best attributed to Freud, many on Twitter did not know how to react. It has been a while since Sadhguru congratulated Indian sports star Hima Das on her fifth gold win. Except, with a tweet saying it is ‘a Golden shower’ for India.

Twitter took a few days to react to Sadhguru’s slip of key. For the uninitiated, ‘golden shower’ is a slang used for the practice of urinating on someone for sexual pleasure. Yes, Sadhguru was definitely not attributing to this shower while talking about Hima Das’s achievements.

211 people are talking about this

“It’s kanak varsha.. Indian way of saying it. Macaulaywadis who have learnt “Rain Rain Go away” as a poem in Monsoon weather of India won’t understand this,” wrote another user.

Someone jumped to Sadhguru’s defence: “Hey, first of all, the kinky meaning is just a slang and not a formal phrase of speech. And you have to also context the expression to get the meaning. People wearing tinted glasses will always see the world through the coloured tint, which others don’t see.”

“Golden shower is a beautifully worded for Hima’s Golden run. The problem is with people who use the word for sexual slurs not with the guru,” wrote another person in defence of Sadhguru.

Another user wrote, “Is he inviting Donald Trump?”

Last year, American lawyer and author James Comey, while promoting his book A Higher Loyalty: Truth, Lies and Leadership, said that it was possible US President Donald Trump spent time with prostitutes in a ‘golden shower’ in Moscow. Trump, however, went on to dismiss the allegations.

The origin of the claim was an explosive dossier authored by Christopher Steele, which said that Trump would get prostitutes to pee on each other in a bed at the Ritz Carlton hotel in Moscow, on a bed that ex-US first couple Barack and Michelle Obama have slept in.

While Trump’s fascination for golden showers might have had the world talking about him, Sadhguru has got Indian Twitter divided.

Tags: Hima Dason gold win is viral for all the wrong reasonsSadhgurutweet to congratulate