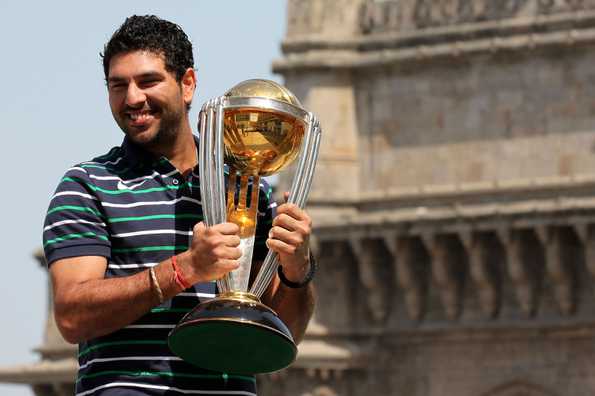 Yuvraj was the Man of the Tournament in India’s title-winning 2011 World Cup campaign. © Getty

India’s swashbuckling all-rounder Yuvraj Singh announced his decision to retire from all forms of cricket on Monday (June 10). In nearly two decades at the highest level, since his ODI debut against Kenya in 2000, Yuvraj featured in 40 Tests, 304 ODIs and 58 T20Is, while also playing a pivotal role in India’s two big triumphs – the 2007 World T20 and the 2011 World Cup.

In a press conference in Mumbai, the 37-year-old made the announcement, saying: “It’s was great rollercoaster ride and beautiful story but it has to come to an end. It was the right time to go.”

Yuvraj was a product on the U-19 set up, impressing with 203 runs in the World Cup in 2000 and making his way to the senior side in less than a year. Though he turned heads with an 80-ball 84 in just his second ODI – against Australia, it wasn’t until the run chase in the NatWest series final at the Lord’s that made him a household name. A 63-ball 69 after a top-order collapse in chase of 327 made him an overnight hero, and in less than a year since, he represented the senior side in the World Cup.

Yuvraj earned his Test debut in 2003, but it turned out to be a format that he couldn’t quite get a hold of – as evidenced by the meagre 40 Test caps he received. In ODIs, however, he walks off as one of the finest batsman to have played for India. The middle-order batsman finished with 8701 runs at an average of 38, that included 14 hundreds and 52 fifties.

Yuvraj proved to be an asset in the shortest format as well, finishing with a career strike rate of 136.38 in the 58 T20I he played for India. He also famously pulled off the feat of smashing six sixes in a single over – against Stuart Broad in the 2007 World T20 – which is yet to be matched in the format in international cricket. Intriguingly though, by his lofty standards, his IPL numbers – 2750 runs at an average of 24.77 in 132 matches – are a tad underwhelming. Yet, he has twice been the top draw in the tournament – fetching bids of INR 14 crore and 16 crore in two successive auctions.

Yuvraj’s finest hour came in the 2011 50-over World Cup, where he orchestrated India’s knockout punch on three-time champions Australia in the quarterfinal. Yuvraj amassed 362 runs in that tournament – hitting four fifties and a century – while also coming into his own as more than just a part-time bowler – picking 15 wickets, the second-best tally for an Indian in that edition of the World Cup. In ODIs overall, he finished with 111 wickets.

In his emotional address, Yuvraj recounted his best memories through his career, while also spelling out his worst.

“I would say I am extremely lucky to play 400-plus games for India. I would’ve not imagined doing this when I started my career as a cricket. Through this journey, some matches that remain in my memory are – the 2002 NatWest series final, my first Test hundred in Lahore in 2004, the 2007 Test series in England, of course the six sixes and the 2007 T20 World Cup. And then the most memorable one was the 2011 World Cup finals.”

“And then, probably the worst day in my career, was the 2014 World T20 final against Sri Lanka where I scored 11 off 21 balls. It was so shattering that I felt my career was over,” Yuvraj said.

A battle with cancer kept him out of the game for a while, and though he returned for a second wind, he wasn’t the same player as before. He still fought on and kept his spot in the side until 2013, but then faced an uncertain future.

After a four-year lay-off between 2013 and 2017, Yuvraj made another comeback – this time in the home series against England in 2017 in Virat Kohli’s first as full-time captain. He was roped in with the intention of adding stability and experience to the troubled No. 4 spot that Manish Pandey couldn’t make his own at that point.

There was also a suggestion that MS Dhoni would take the batting position at two-drop and Yuvraj at 5 would be a link to the lower-order comprising then-inexperienced duo of Kedar Jadhav and Hardik Pandya. He smashed his career-best ODI score – 150 – in the Cuttack ODI in that series and strode into the squad for the Champions Trophy in the same year. But he couldn’t carry that form into the multi-team event.

Yuvraj got picked for the away tour of West Indies right after the Champions Trophy in 2017, where he ended up playing his last ODI for India. Since then, he has made occasional domestic appearances for Punjab and has been a squad player in the last two seasons of the IPL